I’ve been using xylitol for years as a sugar substitute, and sometimes I’m asked about my opinion on the best xylitol on the market, and what the difference is between corn vs birch xylitol.

Now, for those of you who may not have heard of xylitol, or just wondering in general what is xylitol to begin with, we’ll start with a brief explanation. 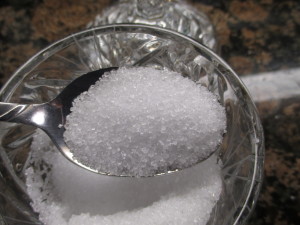 Xylitol is a natural sweetener used as a sugar alternative. Typically derived from either corn or birch, it is commonly sold in a crystalized, granulated form that looks like regular table sugar.

Unlike certain other sugar alternatives, there is no aftertaste with xylitol, which is one of the (many) reasons for its popularity. Another reason for xylitol’s popularity is its low glycemic index (11 on the glycemic index). And, even though it’s not a calorie-free food, it still has 33% fewer calories than good ol’ white table sugar.

Did you know that xylitol is even produced in your own body? It is not a drug or chemical at all – it’s a natural 5-carbon (C5H12O5) sweetener found in a number of fruits as well. Most xylitol on the market is made from birch or corn however. Xylitol is considered a “sugar alcohol.”

According to one of the leading manufacturers of xylitol, Epic (whose products I use), it was initially discovered in the late 1800’s by German chemists who found it in the bark of the birch tree (Note: Wikipedia cites a source stating that it was discovered by both German and French chemists.)

There are a number of benefits of xylitol, which we’ll discuss next.

Protecting Tooth Enamel from Decay: Probably the most well-known benefit to using xylitol is its natural ability to fight tooth decay by reducing the acid-causing bacteria in your mouth. This is not just coming from the companies that sell xylitol. There have been actual studies that have shown this to be true. If you are interested in seeing some of these studies, you can try this one: “Policy on the Use of Xylitol in Caries Prevention” by the American Academy of Pediatric Dentistry.

It also appears (from this study) that for once, it’s okay to use xylitol while pregnant and nursing! It looks as though there’s some evidence that expectant mothers and new mothers are passing along some of the healthy flora from their own bodies as a result of using xylitol.

Safe for Diabetics: Xylitol is low (scoring an “11”) on the glycemic index. It takes less insulin to process xylitol, and that’s a good thing for people with diabetes.

What are Xylitol Side Effects or Dangers?

There are only 2 things that I would warn users about when using xylitol.

1) If you use too much, too soon (say, more than 40 grams per day at first) you may experience some diarrhea. Start off slowly, then increase your usage as your system gets used to it.

2) Xylitol is dangerous for pets – especially dogs! Because your pet has a different metabolism than we humans, this sweetener can cause hypoglycemia (drop in blood pressure) and/or toxicosis in your pet. Just like a number of other “people foods,” avoid letting your pet (especially your pup) come into contact with xylitol.

That’s about it for any potential issues with xylitol!

This is strictly a personal preference (in my opinion). I use both corn based xylitol (Epic is my favorite brand for corn-based) and birch xylitol (Health Garden Xylitol is my favorite for birch-based). 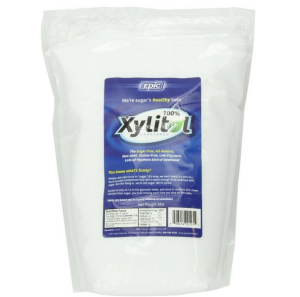 Because Epic uses strictly non-GMO sources of corn, and their products are totally free from corn proteins or other corn by products, I have no issues with it. Also, Epic maintains that their products are gluten-free and casein-free as well.

Epic’s granulated xylitol is a little less expensive than Health Garden, but is a bit “finer” grain. A 5-pound bag runs me about $25 on Amazon (You can check it out here).

How about Health Garden Xylitol? 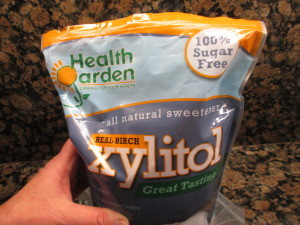 Health Garden’s granulated xylitol is a little more expensive than Epic, but I prefer the “coarser” grain.

Also, Health Garden offers birch xylitol, as you can see from the photo. A 5-pound bag of Health Garden xylitol from birch runs me about $36 or so on Amazon.

So, what’s the best stuff?

Lately, from Epic I have been buying the gum and mints (all of which I really like), and from Health Garden I’ve been buying the granulated xylitol – just to more-or-less spread my loyalties around a little since I honestly don’t have a “must have favorite.” But, those are the only 2 brands I use.

The only issue I ever have is getting the bags to stay sealed. Typically I transfer my Xylitol into glass canisters and use it like I use regular white sugar (which I hardly ever use anymore).

Yes, you can bake and cook with xylitol. I can’t even begin to tell you how many things I use it for.

Again, there’s NO aftertaste like you get with stevia. I’m sorry, I just have a major problem using products with stevia. I have no issues whatsoever with xylitol.

My advice? Try it for yourself and join the growing community of people who have discovered xylitol. And, if you’re interested in the scientific aspects of xylitol, grab a xylitol-sweetened cup of your favorite hot beverage, sit back, and enjoy this presentation: