On our team here at MyFavDeals a number of us use juicers and high-tech blenders, and have for years. For example, if you look at the now-vintage Vitamix models, you can see that some of these amazing appliances are still going strong.

In today’s article, we want to focus on two of what are probably the most popular high-performance blenders for today’s health-conscious families – the Vitamix and the Blendtec. 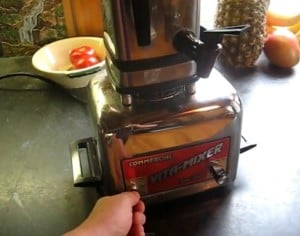 This is an old favorite of ours – one of our dads gifted us with this old Vitamix from the 1990s, and it’s still a workhorse to this day.

We actually have 2 of these – the 1990s model which we keep in one of our residences, and another, slightly newer model that we keep in the place where we occasionally stay so that we don’t have to carry them around.

The thing about the Vitamix is that it’s not a “juicer” in the strictest sense of the word; rather, it is a really high-powered blender that we use primarily for smoothies (but not your ordinary smoothie!) and also for making soups. 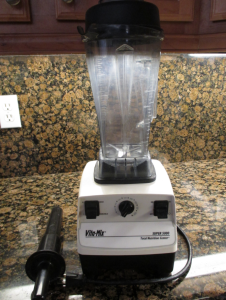 One of our regular favorites is a Blueberry-Kale-Yogurt smoothie that takes on a number of variations. At one of our team’s homes are a number of apple trees which, at times, have more than enough apples to feed a small village.

So, when the season is right, we throw some of those into the mix. Just today, we happened to have some fresh pineapple that we wanted to use, so we threw some of that into the mix.

To tell you this was delicious is an understatement! One of the things that originally attracted us to the Vitamix was its ability to almost “puree” the entire fruit or veggie.

In other words, we get the whole kit’n’kaboodle without losing any of the fiber. Juicers, on the other hand, remove the pulp. But, there are good things about that as well! And we’ll talk about that soon… 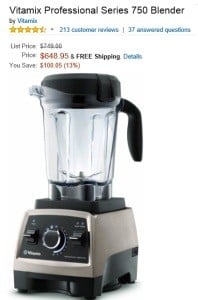 Now, my own personal Vitamixes are older.

But, honestly? Why change something that works? The darned things just don’t wear out.

My brother-in-law just bought one brand new (the 750 model you see in the Amazon link here), and the only differences in my older models and his newer one seem to be 1) the container is a little shorter, and therefore a little easier to store, and 2) there are more variable speeds to his than there are with my older models.

So, as we mentioned, it’s more of a high-powered blender, similar to the BlendTec, which we’ll discuss as well, and then we’ll do a comparison so you can decide which of the two are better for your personal needs.

Here is an introductory video to the Vitamix for your review: 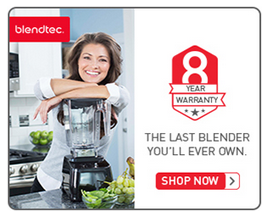 I have to admit up front that I do not OWN a Blendtec; however, I’ve EXPERIENCED the Blendtec. And, I didn’t notice a whole lot of difference in the smoothie I had from the Blendtec over the ones I make on my Vitamix.

Until Vitamix shortened their container (a good thing, for ease of storage), the shorter, squatter container of the Blendtec was very appealing to me.

There is one very, very cool feature that the Blendtec has that is missing on the Vitamix, and that is the “Twister Jar,” which is basically a built-in “spatula” to move the ingredients OFF the sides of the container as it’s blending or smoothy-ing (whatever the word is) back into the primary mix. Very nice feature indeed.

So… drum roll… Blendtech Vs Vitamix

It’s almost a coin-toss at this point. The Vitamix seems a little quieter, and because I’ve had my original one for over 20 years and it works absolutely perfectly, why would I switch now? Even the newer model (a Super 5000 – which is still a late 1990s model, or 2000 year model) works great. It’s not as heavy duty as my original, which is probably commercial grade, but I love it. Maybe it’s just because it’s an old friend, but if it ain’t broke, why fix it?

For those of our readers who are looking for something that “looks” a little more “cool,” then the Blendtec might fit the bill for you.

As far as noise, the Blendtec may sound a little louder, but probably not by much. Remember that once your ingredients begin breaking down in the mix, the operation does get a little quieter.

Now, when it comes to price, you can get either of them for similar costs. These are not “buy ‘em and toss ‘em” machines. They are designed to give you many years of use, and with that comes a price tag of more than the $20 Hamilton Beach single-serve juicer you’ll find at the big box store of your choice (by the way, I own that, too – and use it for quick and easy-to-mix smoothies while on weekend trips – but don’t try to compare it to a Vitamix or Blendtec. There is no comparison).