As technology gets progressively better in every aspect, people from all walks of life have grown more fond of documenting their experiences. The prevalence of social media forums such as Facebook and Instagram make the quality and different perspectives highly sought after, while the widespread usage of Youtube allows everyone — from amateur videographers to tutorial experts to professional athletes — to show the world through their lens.

DSLR cameras have grown vastly in popularity for the more affluent photographers, giving options for tens of different lenses and thousands pixels in resolution. The frontrunner in smaller, more affordable and versatile cameras, however, is the GoPro Hero camera. 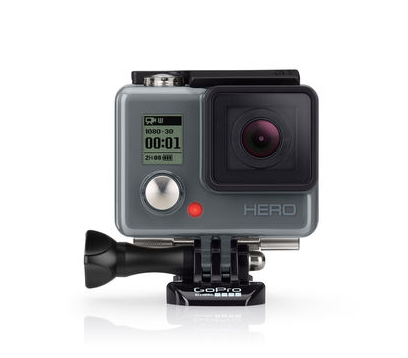 For the past few years, the GoPro has grown in popularity and as it did, better, more capable versions have also emerged on the market. The company sponsors hundreds of professional athletes who use the product to show others what the world looks like from their extreme perspectives.

While the DSLR cameras have a reputation for being very high quality, the GoPro also has astounding quality, especially for its size. For significantly less in price than the large cameras professional photographers use, the GoPro Hero camera is also tiny in comparison, measuring roughly 2 inches wide, an inch and a half tall and close to an inch thick.

The latest version, the Hero 4, is the skinniest and lightest version yet and is capable of taking both photos and videos. 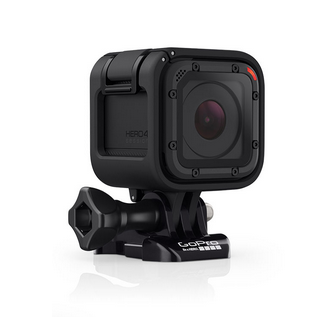 It shoots still photos at 12 megapixels, which for perspective beats the Iphone 6’s 8-megapixel camera.

Not only is the GoPro Hero a small, high quality camera (it’s capable of shooting 4x the resolution of 1080p), but it is also capable of shooting super slow motion videos, still with impressive resolution. The latest version is able to shoot videos at 240 frames per second, which is mind blowing, especially for such a tiny camera.

As a result of the resolution and rate of frames per second, the GoPro Hero has become a household name as a helmet camera for athletes of every discipline. The mounts are adhesive, so they’ve been put on helmets of skydivers, motorcycle gas tanks, flying drones and nearly anything else that moves and provides a unique perspective.

Another huge draw of this camera is the Wifi and Bluetooth compatibility recently added. The addition of Wifi to the growing list of features of the GoPro Hero 4 means users can immediately upload videos to Youtube or Facebook, while the Bluetooth allows the pairing of smart phones and tablets to be used as remote controls, so the camera can be controlled from the ground when in flight on a drone. Those are just a couple of many uses each of those features have.

There are a number of different filming settings including wide angle, a low light setting, various frame speeds for regular speed, slow motion or super slow motion and even a built-in timelapse setting to create timelapse videos without any editing. For those videos that will need editing without a doubt, among the new timelapse feature, the GoPro Hero 4 camera also has a button to mark important moments within footage, so finding clips is easier than ever.

Wow, That Must Cost a Lot!

Admittedly, the GoPro Hero 4 is a bit costly, weighing in at about $399. But to save some money, its predecessor, the GoPro Hero 3+ is only $299 and shoots 10 megapixel stills. It only shoots in 1080p, but that resolution is still breathtaking.

The GoPro Hero 3+ silver edition also has Wifi, but not Bluetooth. It lacks the nighttime setting, but if saving money is the concern, these few sacrifices end up saving you $100 for still an absolutely amazing camera. No matter if the user is an amateur photographer/videographer, a professional musician, a professional athlete or a blogger, the GoPro Hero camera can help share the most high quality extreme perspectives with the world.