AOBiome: Revolutionizing The Idea Of Clean

Grandmothers around the modern world criticize their daughters-in-law for not letting the grandkids come into contact with dirt. When they were growing up, their parents insisted the children consume at least an ounce daily, preferably by eating things that fell on the floor or eating with hands not yet washed after playing in dirt. 🙂

When today’s kids do touch the stuff, parents instantly look for hand sanitizer if they can’t locate hand washing facilities with proper soap. Cleaning products contain chemicals that strip skin of its natural properties leaving it raw and irritated. At AOBiome, researchers wanted to find out what would happen if you allow skin to behave naturally while pursuing cleanliness. 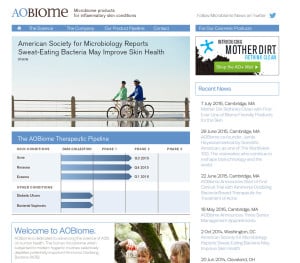 Click the image to see the Mother Dirt Facial and Body Cleanser at their Official Amazon page!

AOBiome is the research partner for Mother Dirt, a company that makes a product containing live bacteria specifically found on human skin. At least, that is where AOB (Ammonia Oxidizing Bacteria) is supposed to be found when people stop stripping it away with chemicals.

AOBiome gets its name from AOB, the name for bacteria found on healthy human skin. Formed in 2013, AOBiome’s team of scientists helped Mother Dirt to develop a product, a mist used to replenish bacteria.

Mother Dirt’s AOBiome Mist costs $49 per bottle and is a “live” product. Although the idea of spraying bacteria on one’s body is revolting to a lot of consumers, whatever Mother Dirt produced sold out quickly and they had to expand their operations to accommodate demand.

Click this picture to go directly to the AO+ Mist page at Amazon!

Mother Dirt’s mist has received praise from some scientists and medical professionals for the way it restores skin to a naturally live but clean state modern children and possibly their parents can’t imagine or remember, at least not in North America.

The Mother Dirt/AOBiome team has launched three products. Besides the mist, they also carry a cleanser and shampoo. These are not live products but contain carefully vetted materials that promote the efficacy of AOB in the mist.

If you are using the mist, cleaning face and body with the cleanser or washing your hair with their shampoo will not wash away good bacteria. Some consumers like to use this as shaving cream too.

Customers must remember to store AOBiome Mist differently from the way they look after other skin products. Preservatives have not been used to give this product a long shelf life, so it has to be either stored at room temperature or in the refrigerator. At room temperature, the contents remain live for 4 weeks. In the refrigerator, bacteria continue to thrive for 6 months.

A price tag of $49 might seem difficult enough to swallow, but critics of the product are not talking about the price. They have voiced concerns that spraying bacteria on one’s skin is unhealthy, not clean, and that this product will amplify the spread of harmful germs.

Even though clients claim to enjoy better balance and softer skin, there is mistrust in western communities about the idea of doing to one’s outer body what has long been embraced for the GI tract: preserving a balance of good bacteria to overcome the bad.

In democratic countries, however, consumers have the right to decide what makes the most sense to them. People who believe in sterility will clean with chemicals. Those wanting a revolutionary and more natural level of clean will switch to AOBiome Mist, if they can afford it, but will otherwise continue playing in the dirt for their own good.