Comments Off on NEW! Review of AccuScore Sports – Accurate Data

At AccuScore, the team uses software and math to calculate the likely outcome of a game or an event. More is riding on the outcome than accolades for teams, political opponents, and other competitors in their respective fields and professions. Fans participate in games where predictions are important, such as fantasy leagues. Where betting is legal, a friendly wager is riding on who wins and not just who, but by how many points. Who scored the goals? AccuScore sports simulation provides data one can use to make a sensible prediction as to the likely outcome of a match. 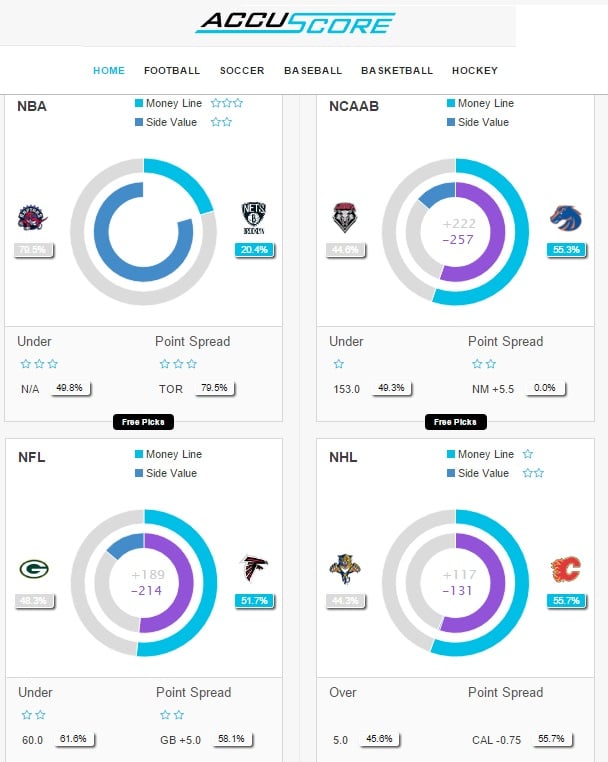 Perhaps the founder of AccuScore was playing fantasy football with his friends when the idea came to him: what if he, and they, could stop making random guesses? Or, imagine they no longer had to compile statistics in booklets and could refer to a model online.

That would make life a lot less complicated and data would be available from any Wi-Fi connected device. Men take their sports very seriously and AccuScore helps them bring a measure of mathematical accuracy to fan activity and betting.

Maybe the founder and his buddies tried a prototype and discovered that they were accurate much of the time; enough to believe their service could be marketable and profitable. I imagine that is how AccuScore became a real product that went live online. Guys started talking; one of them experimented with some IT; and the rest is history.

This website simulates what is likely to happen on match day using an algorithm which incorporates past performance and factors such as weather, who the coach is, who is on the team, and the location of a game (home or away). Every game goes through calculations about 10,000 times. The program covers every major sport in the United States and world soccer’s top-ten leagues.

Predict the game based on these calculations or use analytical data to go about it the old-fashioned way; using your own foresight and judgment. Rank hockey players against each other for an outcome which, though not guaranteed, is highly reliable. Use AccuScore to predict the next major election.

Tuomas Kanervala, currently CEO, deals with management overall. He turns to the expertise of numerous individuals in order to develop this online product with the objective of entertaining sports fans, whether they love basketball, hockey, or football. His previous professional work included management and consultancy with a number of major firms.

Eero Mäki-Esko, a minority shareholder on the board, offers advice regarding how to find data and create software. His decision-making skills are extremely useful as well as computer science knowledge and experience with Nokia.

Riku Soininen is an AccuScore Partner/Advisor and co-founder of his own sports-related business, Global Sports Media. His technology degree places Soininen in a good position to understand the IT aspects of this job although he participates on other boards as well with various IT companies.

Visit the FAQ section to determine if this really is a useful tool and one you would pay to subscribe to. Find out how to navigate and use data with some special tactics for making the very most of this site. Could this be the ideal Father’s Day present for dad, the guy who inspired your love of sports?

When your and your friends get together with their fantasy league predictions, ready to see who had it right this weekend, you might be curious as to when AccuScore posts picks. How soon before the game do they state their final choices? Statistics about the score and player analysis is updated regularly as the season progresses and every game is predicted long before the whistle blows. Obviously, youwill want to view the last stated predictions before having to submit your choices for real to a bookie or whoever controls the money when you run a pool at work or with friends.

Injuries, changes to team format, and other last-minute alterations might not play any part in predictions if they come too late, but if there is time they will be factored into data. Critical players hold the key to a win or a loss, however, so unless one of these individuals takes a hit he can’t recover from in time for match day, AccuScore predicts little change if any to the results they forecast.

Right before kick-off, games are re-simulated until it’s no longer viable or ethical to do so. Once the ball is first played, no more changes will be made.

AccuScore uses the metric system rather than dealing in currency which could become confusing with the number of countries involved. There are Canadian, Italian, English, and American teams on the various rosters, for instance. Imagine what confusion that would cause during the World Cup of Soccer. Instead of money, AccuScore uses “units” of out 100.

Membership Details: How much does AccuScore Cost? 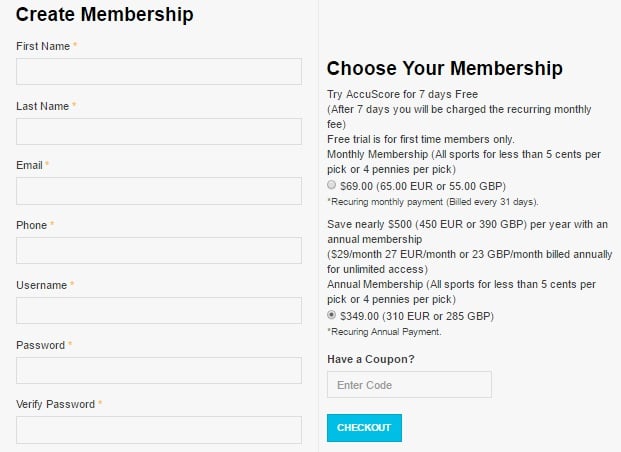 Add the English Premier League (what they refer to as “football” in the UK), Italian Serie A, German Bundesliga, and Spanish Primera Liga for a total of 1,446 games per season plus the UEFA Cup. Data starts with the regular season but continues to post-season games as well. Sometimes, the prompt reads “no pick” when the points are too close to choose. Again, you can sign up for a monthly or annual membership.

Not the Same as ESPN Insider

ESPN Insider lacks full box scores and they don’t offer final scores either. AccuScore provides all the data which is an advantage of membership. Find out all of the details which contribute to the likely outcome and use them as-is or employ data to come up with an educated selection; the choice is yours. No results are guaranteed, but their algorithm gets the outcome right more often than virtually any human being. View the home page for an idea of what is available to members of this exciting service; the types of data that guys get excited discussing over a case of beer and a bowl of potato chips.