Radar detection enthusiasts know what their top brands of radar detectors are: Beltronics and Escort. These two brands routinely make it to the top of “best of” lists for good reasons. Their designers continue to push the boundaries of radar detection by isolating noises, detecting cameras, and extending range. Read about the two latest models to be released — the Beltronics GT-7 and Escort Max 360. Compare them to each other and against a few other models.

What Do Consumers Want?

The basic function of a radar detector is to determine when a police car is around, ready to use his radar to catch speeders. All radar detectors do this but range differs. Newer, better devices can see these radar guns coming from further away and isolate the source of a radar signal so as to determine which ones emanate from a police speed gun and which ones come from places they can disregard.

Newer products detect where a radar source is located and are becoming increasingly precise. Radar detectors can themselves be detected by police radar but the best and latest models are covered in a virtual shadow where most types of police technology are concerned. You might find GPS built into devices, facilitating two things: locating radar and also allowing a unit to appear like a harmless GPS without the radar detection function.

Escort’s high-definition device has extended the reach of their radar detection while providing one other element: direction finding. The “360” in their title refers to 360º detection thanks to forward and rear antennae. Find out where radar is coming from: behind, to the side, or in front. Color coding allows you to tell what sort of signal antennae are reading: X, K, or Ka Band. 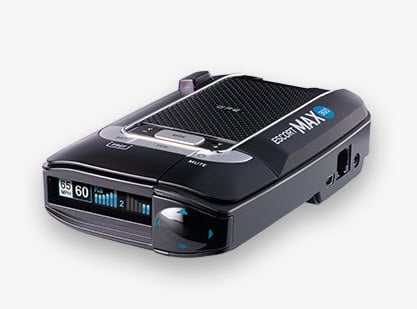 GPS is built into the Escort Max 360 plus a feature which locks out false radar signals from irrelevant sources (nearby motion detectors, for instance). The Max 360 detects red lights and speed cameras which are in fixed locations, inserting them in the device’s database for future reference. A feature called “AutoLearn” technology makes this a unique product. Obviously, the owner puts this to use when he travels down the same roads frequently. He does not benefit nearly as much when the route is new, but his antennae are still detecting radar sources and will add them to the database regularly.

Services like Auto Scan and City Mode cut down on the number of alerts the user receives from automatic garage door openers which also emit a radar signal. City Mode cuts out signals from drones and K-band sources. Traffic Signal Rejection is also built in. Escort’s Defender Database is always on the lookout for sources of radar detection which could land a driver in hot water including air patrols.

This is a Bluetooth-connected device for a year whether you operate an iPhone or Android phone. After one year the consumer has to buy a subscription. Users of the “Escort Live!” app are connected to each other. Enjoy the confidence of being able to see your speed versus the posted speed limit at all times. The Escort Max 360 is packaged with a sticky-mount system, coiled cigarette lighter cord, and protective case. You even receive a “ticket protection guarantee.” If that isn’t a sign of confidence nothing is.

Why is it so much cheaper?

One element is missing: dual antennae. The Beltronics does, however, offer a wide signal detection range, built-in GPS, pre-loaded camera database (to alert consumers to speed cameras), and programs which lock out or reduce irrelevant radar signals. Beltronics also provides a beautiful display screen which shows you the type, strength, and quality of a detected radar signal. 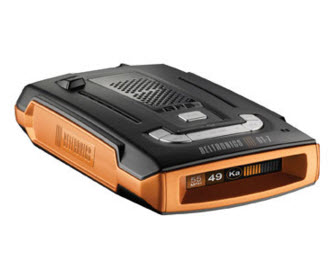 A Digital Signal Processing microprocessor powers the many properties of this more affordable piece of equipment. The GT-7’s Defender database, like that of the Max 360, locates and warns of speed traps, adding new ones to the list as they arise.

Beltronics’ device is compatible with the same app included with the Escort radar detector and is packaged in the same way. Is it as good as Escort’s Max 360? The only feature which appears to be missing is that forward and rear antenna set-up. For $200 less this could be your better deal as it seems to contain many of identical elements: isolating signals, for instance. Then again, Escort’s side-front-rear detection system and color coding to indicate signal type are very handy to have.

A previous Beltronics product, the STi Magnum for about $630, is completely undetectable by any sort of speed reading radar system. The two devices above are not entirely undetectable. They all supply similar methods to reduce false alarms but the Beltronics STi Magnum Plus even turns into a GPS-only product with its “Instant Kill” button (for twice the price). For their respective prices, however, the Max 360 and GT-7 supply astounding value and exceptional technological advancement.