Comments Off on The Cape Cod Bracelet Phenomenon

Who is wearing what in the celebrity world today? Pay close attention: it is going to cause a stir in the fashion world whether you are looking at watches, fitness bands, earrings, bracelets, or clothes. While many of those trends will be traced back to a big design house, some will be connected to a small business and shocked artists who had no idea his creation would cause such a stir. The Cape Cod Bracelet has been around for years but what caused its popularity to soar was not the design so much as who was seen loving this design on the small screen.

John Carey’s Famous Fan
An actress from a popular TV show who graduated in the area where Carey’s shop is located was spotted wearing her own Cape Cod Bracelet. This article of jewelry became part of her on-screen outfit; an accessory she did not remove for a long time. When this was spotted by fans of the show, lots of them wanted to know where they could get a bracelet just like it. So what is the Cape Cod Bracelet?

It is nothing flashy; just something John Carey came up with three decades ago and which met with modest success at the time. He made it for a child in such a way that it wouldn’t fall off the child’s wrist. His band is made from gold or silver, so its quality is indisputable. The two ends are held in place by a screwball and, in some versions, there is a second screwball. Nothing could be simpler, yet that’s what the current generation goes for. They love minimalism and find simplicity more sophisticated than complex designs.

Since its debut on television, this design has become a star in its own right. Carey’s star was also destined to rise. He went from small-business owner to an exhausted artisan struggling to keep up with demand. In an effort to satisfy respectful customers, this ordinary man with modest ambitions had to get help from those closest to him and also enlarge his premises.

What Happened as a Result of TV Fame? 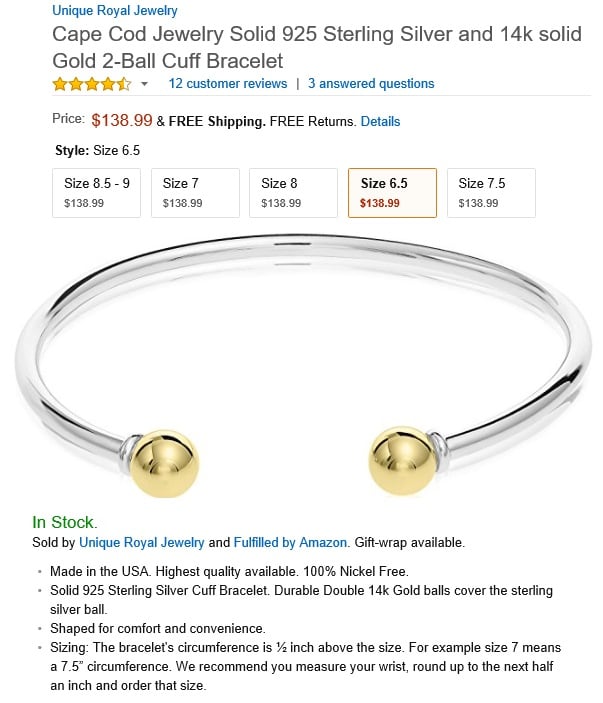 Click this Amazon image of this Cape Cog Bracelet to see the product page at Amazon!

After the bracelet’s popularity started to increase, Eden Hand Arts, Carey’s shop, became a very busy place and too small for the bustle going on inside. Everyone wanted their own Cape Cod Bracelet which has also been called the Dennis bracelet named for the Massachusetts town where this shop can be found. Carey’s shop, opened nearly 50 years ago, always had an appeal of its own, like a lot of quirky art shops do with their unique pottery and other functional pieces.

The result of sudden fame, however, was to alter the gentle course of a part-time career. Eden Hand Arts turned into a tourist attraction, something it was never designed for and not what they really desired. Carey and his wife Eve don’t even advertise their store or its wares.

Trouble with the Locals

Their newfound popularity caused problems. Many local people were unhappy because of traffic issues and the police had to become involved. One can imagine how uncomfortable that would have been for the mild-mannered artists. There was no room to park at their old premises, before they moved, and even this newer shop is a little small, perhaps to discourage large numbers of customers from coming to visit.

It’s all a little bit much for a small town and inhabitants not accustomed to so much fame. Historic Dennis, part of Yarmouth, is known for its shipping past, its Museum of Art, interesting historic buildings, whale watching, and a love of the arts in general. This coastal location draws families and history buffs, but not crowds of fashion-minded shoppers.

John Carey went from making all of his own work to hiring someone to help him keep up with demand. Helpers make a bracelet in one hour, custom-fitted so that it will fit the individual without falling off. People line up for more than 2 hours to get theirs, especially on a Saturday, and the Cape Cod Bracelet has become a trendy “must-have” for visitors, locals, and locals’ friends.

This bracelet was once something that locals considered their own. It wasn’t known or purchased by foreigners. People didn’t come to Dennis to find this little shop in a garage over the owners’ home; their shop isn’t listed as a tourist attraction on the town’s website. Quality sells itself, however, and word has spread.

Before their shop became so popular, Eden Hand Arts was just a small business where two teachers, now retired, could sell what they made. They operated the business until 2001 when a daughter took over. She and her mother are both potters. The daughter continues with her artistry while her husband makes those famous bracelets. Some customers own multiple bracelets and matching accessories. Meanwhile, John and Eve Carey still create items which are sold in the shop even though they are in their 80s.

Eden Hand Arts remains open from 10 to 5 but only from May until December. It’s a seasonal shop, a little quieter mid-week, but potentially nuts on Saturdays. It seems ironic that any business would eschew publicity, but that’s how they feel. Telling more people creates additional problems they just don’t want for themselves or the town. Whatever ambitions other jewelers and artisans have for their talents, these modest Massachusetts people really only want to do what they love.

John Carey and his family have tried to secure a patent for his bracelet. Success has eluded them so far in this department though they continue. Meanwhile the business has spread further north and west, even to Vancouver Island, BC. One family member sells similar jewelry from a shop they call Eden Northwest with the family’s blessing. They learned from John Carey and now copy his methods for online customers. This is another way to obtain the style if not the experience.

Other stores near Dennis sell representations of the original. Inspired by Carey’s Cape Cod or Dennis Bracelet, they bear some resemblance and are fairly good quality. One day, the family believes cheap copies will inevitably appear.