Okay, I mentioned in an earlier post about Livionex Dental Gel (a few years ago now, in late March, 2015) that I was excited to try this pretty interesting gel. AS OF THIS UPDATE: October 2019, I STILL use it every day, only now it’s called LiveFresh). Anyway, I had ordered it, and have used it very sparingly, yet regularly since then. Other than missing a few days when I was packing and traveling to go home after spending our winter down south, I have used it twice daily. 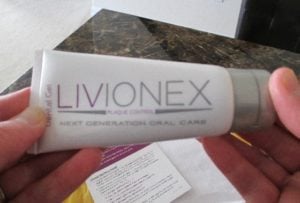 UPDATE! You can NOW buy LIVFRESH by Livionex on Amazon! Click the photo… Note, the new LIVFRESH product looks different.

I also promised to report back with what I’ve experienced. In my last post, a reader left a comment that I’m going to echo here: I really think that this product can turn the dental care industry on its head.

I think I may have mentioned that I have receding gumlines and the teeth are exposed in that area. It’s possible I caused this by scrubbing my teeth all my life. Nonetheless, it has been a very sensitive area. Since using Livionex, while it obviously can’t “regrow” my gumlines, I can definitely say that the sensitivity has diminished considerably. Also, it may be my imagination, but the exposed lower part of the my teeth seems to be lighter in appearance (is it possible that there has been some remineralization there?)

It’s now October, 2019, and I still use Liveionex – aka nowadays as LiveFresh – daily, and I can say it does NOT remineralize teeth, otherwise, mine would have seen the effects. However, I CAN attest that I STILL have NO plaque buildup. So, it definitely lives up to its promises – at least on my teeth.

The way my teeth feel in general? Awesome! There’s almost a “squeaky” sound when I brush – like the teeth are getting really squeaky-clean.

I’ve been prone to tartar buildup in the past, and can also attest to the fact that there is virtually no buildup. I’ve been trying (in vain) to get a decent photo of my teeth, but you wouldn’t be able to tell that they are less sensitive by seeing a photo!

Anyway, I’ve just ordered another tube – I’m not sure why my 1st tube lasted so long (over 2 months), but it’s possible I was using less than a pea-sized amount (but it seemed “pea-sized” to me).

What other Livionex reviews mentioned

There were some Livionex reviews where the writers mention that it was hard to keep on their toothbrush, but I had no problem with that at all. I also don’t mind the fact that it does not foam – I’m used to that with some other toothpastes that I’ve used.

I CAN get that small amount to spread out all over my tooth surfaces, so using a small amount seems sufficient.

I do not use fluoride

There are people who recommend fluoride as a method of remineralization (including the author of the Dentist Be Damned! book about how to cure tooth decay naturally – which we do promote here). I’ve long held a personal bias against fluoride – but everyone has their own opinion on that, which I certainly respect. But, since I haven’t liked using it, it’s my hope that the use of LivFresh (along with some of the other suggestions in Dentist Be Damned!) will be enough to help strengthen my own tooth enamel, and keep my teeth and gums healthy for many years to come!

I would recommend LivFresh Dental Gel, and while I do not have any direct affiliation with them, you can go directly to the LivFresh product page at Amazon here (yes, I AM an affiliate at Amazon, so if you do decide to order via my link, you have my gratitude!)