“Cool Gadget” ALERT! Read this awesome iWalk2.0 Hands Free Crutch Review I just personally received! AND, the OTHER part of this post is to let you know that the iWalk2.0 is on AMAZON – and it’s $149 + Free Shipping. SAME PRICE EVERYWHERE! (See it HERE)

(UPDATE: See below – This product is now a recipient of our exclusive MyFavDeals Stamp of Approval!) 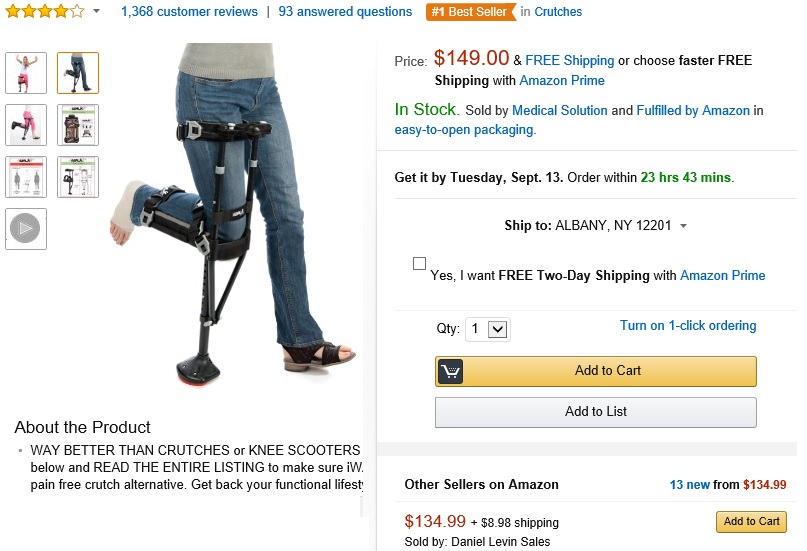 Order the iWalk at Amazon! Only $149 + Free Shipping! Click this Photo and you’ll go directly to the product page at Amazon.com

The iWalk 2.0 reviews on Amazon are good and all, but I just had a fun visit with my brother-in-law and his fiancée who RAVED about this gizmo…

They told me the whole story, and I’ll share it here with you – and this should help you determine if the iWalk is right for your situation.

The Amazon listing has more info on sizing, etc… but basically, if you are between the heights of about 4′ 10″ and 6′ 6″ and weigh 275 pounds or less, you are likely able to fit the device. There are a few other considerations that are explained in the listing here at Amazon that you should read before buying.

So, here’s the backstory of this iWalk 2.0 Review:

In March (2016), my brother-in-law underwent a serious foot operation – not just a severe bunionectomy (his foot was quite deformed as a result of the severity of the bunion, and he was quickly losing his ability to walk at all without agonizing pain), but to also try to correct the 2nd toe along with the big toe.

After 4 hours on the operating table, he wound up with a plate and a bunch of screws to help keep the front of his foot and toes aligned as best as possible.

It was a difficult recovery because of the trauma to the foot, and after he was sent home with crutches, he quickly discovered that using them was causing its own issues. He works on the second floor of an office building with no elevator. Crutches were very difficult, and within days caused extensive bruising and pain in his chest and sides.

The doctor (whom I won’t name in public, but I can tell you that he is a well-known podiatric surgeon in the Boston area) suggested that perhaps this assistive mobility device called the iWalk2.0 Hands Free Crutch might be something to consider since it purportedly eliminates the use of crutches for those who can use the device.

So, my brother-in-law (who is not only an engineer, but also analyzes and researches stuff for a living) began looking for all the info he could find online, and finally decided that for $149 and free shipping on Amazon, the iWalk was worth a shot.

Everyone is impressed with the iWalk

Now, I should also tell you that my brother-in-law is not easily impressed. But for one of the first times in over 22 years that I’ve known this man, he could not say enough about the iWalk.

“This is the most wonderful thing I’ve ever seen…I don’t know why this is not a billion dollar company!”

He also said that he was so impressed he actually wrote to the company – again, not something is ever does. 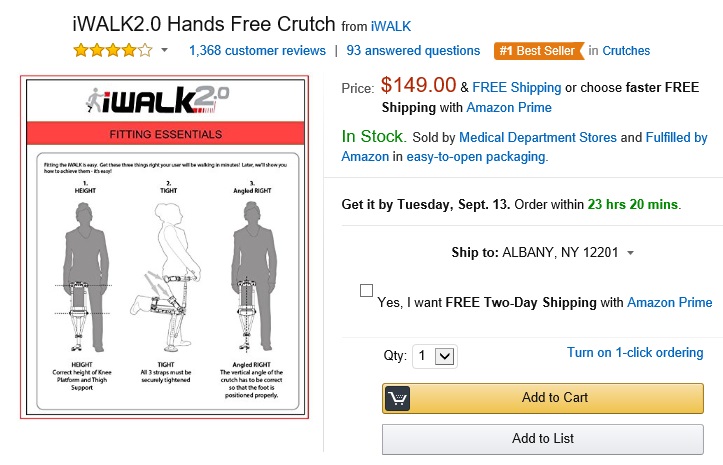 Both he and his fiancée were – and still are – completely smitten with this thing. They were laughing about how people were chuckling when he came to work with the iWalk2.0 – calling him “peg-leg” and talking about getting him a parrot and pirate eye-patch – all in good humor.

Because before the iWalk there was no joking, and my brother-in-law was getting seriously concerned about how he could function for those upcoming months before he could walk again.

As soon as he got the iWalk, within a few minutes he had the thing completely adjusted and was cruising around on it almost instantly.

Also, because he travels extensively for work, he was able to pack it to travel; he says it will fit in a carry-on (at least his carry-on will fit it).

I’ve added a company video below so that you can see this in action (my brother-in-law did not make a video of his own, but this will give you the gist of it).

Anyway, as our regular readers know, whenever we find something “so good” that it changes lives, you can bet we’re going to talk about it here at MyFavDeals.org.

ATTENTION! Given my brother-in-law’s high praise, we think that the only thing left for us to do is to award the iWalk2.0 Hands Free Crutch the exclusive MyFavDeals.org Official Stamp of Approval! iWalk has also garnered several other industry awards including all the major awards at  Medtrade, the largest medical device show in North America!

Beautifully done iWalkFree! You changed my brother-in-law’s life for the better, and we know you’re doing the same for countless others.

We’re proud to promote the iWalk2.0 Hands Free Crutch here. Again, it’s $149 – same price everywhere! And of course you get FREE SHIPPING too!